A network is a group of two or more computers that are linked together. Networks are usually used to share resources, exchange files or communicate with other users. 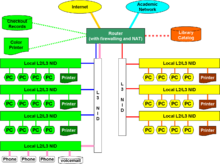 Typical library network, in a branching tree map and controlled access to resources

A network is a set of nodes connected by communication links. A node can be a computer, printer, or any other device capable of sending or receiving data from the other node through the network.

Other devices are often needed for the network to work correctly. Examples for such devices include hubs and awitches. Different kinds of network can be connected to each other with a router. In general, networks that use cables to connect can operate at higher speeds than those using wireless technology.

A (LAN) connects computers which are close together. Building a LAN is easier than connecting different networks (by a The largest Wide Area Network is the internet

Computers can be part of several different networks. Networks can also be parts of bigger networks. The local area network in a small business is usually connected to the corporate network of the larger company. These connections may allow access to the Internet. For example, a shop may use it to show on its web sitet hrough a web server or to convert received orders into shipping instructions.